Welcome to the website of Anna Koetse - teddy bear maker, painter and designer. Feel free to browse around. For any questions or comments, please leave your message in the contact field.

Perm, Russia – “The teddy is a symbol of a happy youth”

In old Finnish language the word ‘perem’ means ‘far land’ and that is where Perm derived its name from. The 1.2 million inhabitants of the city live 1300 km east from Moscow, in the most eastern city of Europe, close to the Ural mountains and nestled along both sides of the Kama river, the second largest river in Europe. Many famous names like Chaikovsky, Boris Pasternak, founder of the Ballet Russes Sergev Diaghilev and ballerina Anna Pavlova lived is this city and have put Perm on the cultural world list thanks to their widely known artistic contributions. Perm is inspiring, multicultural and a cross way in many ways. The Trans Siberian Express from Moscow to Vladivostok makes a stop here and most tourists are from Russia itself.

Perm in summer is sunny and friendly and, as if summer likes to compete with her counterpart winter, it now snows transparent fluffy white balls with the seeds of the poplars covering the roads as if a huge duvet from heaven has just opened.

Hardly recovered from the 13 hours door-to-door trip and the 4 hours time difference, the teddies get full attention from press and television in the Wonderhall in Perm. Natascha Kataeva, founder of the very first Teddy Bear Club in Russia and Irina Myzina, owner of the renowned Wachtanov Gallery in Moscow reply patiently to all the questions the press like to be answered. Irina is a teddy pioneer in Russia, and this year she celebrates the 14th anniversary of her gallery where artist dolls and –bears are nicely displayed as truly pieces of art. Both ladies travel a lot for the sake of the teddy and they both organize happenings where teddy collectors and makers can meet and greet.
Although the common brown bear, in Russian ‘medved’, is well known and a respected inhabitant in Perm region (the city even has the image of the bear in the arms of the town) the ‘teddy’ bear is a bit of a newcomer. The famous Russian Misha or Mishka bear (the diminutive form of medved), the mascotte of the Olympic Games in 1980, is more a cartoonish type of bear with human features as he appeared with a tear in his eye during the closing ceremony in Moscow. His looks are from a small cuddly and smiling bear, rather than a teddy. But during this week-end in June 17-19, the citizens in Perm and people living as far as Siberia, Moscow, Nizhny Novgorod or Ekaterinaburg get to learn everything about the teddy during the MedveDays, so to say the ‘beary’ days. The Slavic term for bear ‘medved’ is literally and very appropriately translated in “ the one who knows honey”.

It all starts with the Parade along the high street, Komsomolskii prospekt from the starting point at Bolshevistakaya street where Perm’s proud, the statue of the “Medved” bear is located. Everyone with the word ‘bear’ (medved) in its name, like Medvedev, or other related names, like Micha, Mishka, Michenka, or Mikhail, Michael and everyone who carries a teddy, or is dressed as a teddy in some way is invited to take part in the procession. A 3-meter high, air-stuffed bear is guiding us and walks front row. Police is holding the traffic and TV-camera’s are following the happening, as this is the first local event where the teddy takes such an important place. At 11.00 a.m. the official opening of the Medvedays is a fact, proceeding by music and dance. Striking white tents are set up at the park along the Kama river and opposite the historical Meshkov House, where Perm’s Museum of Regional Studies is located. Here at about 60 exhibitors show off their work in an equal number of styles and interpretations of the teddy. The show has free entrance and there is great interest in the creations and the little workshops where techniques are explained. At the First Aid corner old teddies are operated at eyes and ears and arms or legs get stuffing where needed.

At noon the special exhibition of ‘The Secret Teddy” of Irina Myzina from the Wachtanoff Gallery and photographer Wladimir Pomogayev, both form Moscow, opens in the basement of the museum at the other side of the street. Blown-up pictures show yesterdays teddies and nowadays creations, all from Irina’s private collection, cautiously carried in the hands of divergent people from all ages. Only featuring one particular teddy and the people’s arms carefully holding it against a pitch-black background on the picture results in a fascinating warm and mollifying feeling. On the first floor of the museum is the permanent exposition of the history of the Russian teddy and the private collection of Natascha Kataeva, with a special ‘thanks’ to Regina Tereshkina, collector of toys and bears from all over the world, and who left a heritage of toys with great history to the city Perm.

No show without a contest. And, although it is hard to compare entries in a contest without categories, the jury agrees unanimously that the Winner of the event’s competition is the interpretation of the real bear, made by Nikolay Karelov .The creation is sawed from branches from a birch, which shows the bear as he is in all his simplicity and strength. Second best is the teddy that shows where Perm is known for: engineering, attending ballet performances, playing football and his writers.

On Sunday evening it is auction time and all proceeds are for the benefit of a good purpose. Very professionally offered and displayed, the 13 items are sold, amongst them 4 teddies of a Limited Edition of Steiff. The self-made creation of the Minister of Culture of Perm, Mr. Nikolaj Nowitschkow (looking a huggable teddy himself) gets a lot of interest and his furry inspiration meets his proud adoption parent after the exciting bidding. ‘Piece the resistance’ is the teddy-cake-lot, sold to the owner of the Museum and which is shared by all people attending the auction. A round of applause for Natascha Kataeva who organized this event with so much enthusiasm, a big thank you to the director of the Museum of Perm, who understands the importance and fast growing interest of the teddy, and ‘chapeau’ for the city of Perm for its financial contribution for these Medved-Teddy Days. To one last question about his opinion of the teddy, the Minister of Culture of Perm melancholy muses: ‘to me the teddy bear is a symbol of a happy youth’. Nothing can beat these wise words, so we say goodbye to Perm and its incredible hospitality. 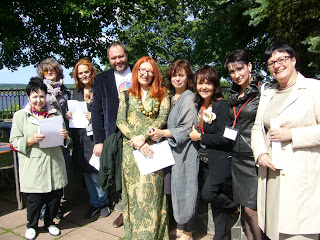